We visited world famous Dean’s Blue Hole, a 600-foot deep blue hole (and underwater sink hole) where the annual freediving championships are held. We snorkeled around the edge of it, but neither of us could bring ourselves to swim out over the middle of it. (What? We’re going to suddenly plummet to the bottom just because it’s deep? I didn’t say it made sense.)

We found the house of one of our long-time clients from when we had jobs, Dr. Larry Levin. He flies to Long Island from his home in Rhode Island in his Socata Trinidad (single engine airplane) about once a month to run the only dental clinic on the island. Unfortunately, we keep missing him – he zigs when we zag – and this time was no different.

We met a couple from North Carolina on the beach one day, and they told us they have a house overlooking the ocean, and that we should stop by for coffee the next day, before we took off on our rental car exploration of the island. So we did. What a cool place they’ve built! It’s tiny, it’s high on the rocky shore of the East side of the island, it has no electricity nor running water, near-constant sea breeze, and an incredible view! They have scrounged the beach for years and build stuff with their found treasures – furniture, decorations, etc. They fly down in their Mooney (single engine airplane) pretty regularly and just relax, and enjoy their little paradise. And we can’t for the life of us remember their names. But that’s the way it’s been on this trip more often than not – we meet people, spend a little time with them, usually learn some really interesting stuff about them, and then we never see them again.

Next stop was the tiny island of Conception, about 20 nm NE of Long Island. It’s a national park, with no one and nothing on it, and it has the most beautiful bay and beach of any we’ve seen in the Bahamas. When we arrived, there wasn’t another soul to be seen – and in June in the Bahamas, that’s saying something. We spent only a day or so there, did a little snorkeling, saw the biggest Nassau Grouper ever (I swear he was the size of a suitcase!), walked on both sides of the island, and then when another boat showed up, it was time to move on.

The southern tip of Cat Island is only about 30 miles from Conception, but where we were headed, it was a total of about 45, which we did on another beautiful day for being on the ocean. Our first stop on Cat was New Bight, a tiny settlement on the West side of the island. (All of our time on Long, Cat, Conception, and Eleuthera was on the West side – the East side is often too rough for us to travel there, and almost all of the settlements are on the West sides.) We simply had to stop at New Bight, so that we could climb Mount Alvernia – the highest point in the Bahamas! For one thing, we needed some exercise, so a little mountain climbing seemed like a good idea. But the real attraction of Mount Alvernia is The Hermitage – a tiny compound built by the aforementioned Father Jerome to spend the waning years of his life. It has everything one needs to live and worship – a chapel, a place to cook, and sleep, and shower, and everything else – all built for one, single person. He also built a monument of sorts on the steep, rocky path up to it – all of the “Stations of the Cross” are represented along the way. I can imagine for someone who is Catholic, especially a devout Catholic, that it would be a moving experience to hike it. There’s a picture of each one of the surviving stations in the gallery at the end of this post, along with many other pictures of The Hermitage. By the way, our mountain climbing wasn’t as strenuous as most – it turns out that the highest point in all of the Bahamas is only 206 feet above sea level! 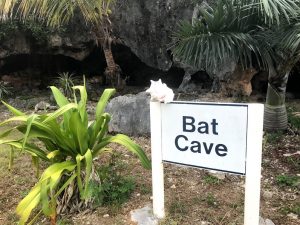 We rented a car on Cat, too, and drove around much of the island. One of our stops was the Bat Cave (see pictures). Since all of the Bahamas is made of limestone, there are lots of caves, sink holes, and other natural formations that happen when limestone erodes. This particular cave is right on the side of the road, so we just had to go in. Takes all of three minutes to see it all, but if you go all the way to the back, there are bats! Interestingly, this was our second cave with bats in the Bahamas, the first being on Cave Cay.

Fun Fact: Cat Island is the only place in the Bahamas to ever have a railroad. In the 1800’s, when there was significant agriculture on Cat, the railroad was used to transport produce to a port for loading on ships to Europe and the US. There’s almost none of it left now – we didn’t find any of it. Just another tidbit in the long, strange history of these islands.

After a couple nights anchored at New Bight, we moved a few hours north to Bennett’s Harbour. We found some nice reefs to snorkel, harvested a few of their groupers, spent a night or two, but apparently, didn’t take many pictures. No big deal – it was just another beautiful bay, with beautiful water, overlooking a beautiful beach. Nuthin’ special.

Just south of Bennett’s Harbour, a little north of Alligator Point, we took Killer about a mile and a half up into a big tidal creek. It was beautiful up in there, but the main attraction is turtles – juveniles who aren’t yet big enough to be out in the ocean full time. We saw a lot on the way in, so on the way out, we counted them – nineteen! Plus two or three sharks, and a big stingray or two.

The day we left Bennett’s Harbour was maybe the flattest, calmest, smoothest, pick-your-favorite-adjective-for-good-boating-est day we’ve yet experienced. The picture of Killer in our wake, with every wave distinct and undisturbed to the horizon, says it all. A rare day indeed.

Our last stop before Governor’s Harbour on Eleuthera was to be Tarpum Bay, but it was farther than we wanted to go in one day, so we made a quick overnight stop at Little San Salvador, a tiny island with a big bay, all of it owned by one of the cruise ship lines. Fortunately, we got there after the ship had left, and we left before the next one arrived, so we had it pretty much to ourselves for the few waking hours we were there. Unfortunately, while maneuvering to anchor, Captain Fran heard an unfamiliar noise and put it in neutral, but not before Killer’s tow line had gotten wrapped around the prop. Ugh! Several breath-hold dives later, the prop was clear, the tow line was only about 10 feet shorter, and we had learned a very valuable lesson – tie Killer CLOSE to Smartini before doing any maneuvering.

Tarpum Bay, on Eleuthere,  is home to the Bahamas Plastic Movement, whose mission it is to reduce the amount of plastic waste that ends up in the environment. Their major achievement so far is helping to get plastic bags banned in the Bahamas (to take effect in 2020). Fran learned of them through a Pike High School student named Molly Denning. (Pike is where my daughter Maddie went, along with all of her friends, and the kids of many of our friends in Indy.) Molly did an internship with BPM during college. Molly is friends with the BenHameda family, who are dear friends of ours. The connection was made, and Fran started communicating with Kristal Ambrose, the founder of the organization. Kristal was to be off island, doing an internship of her own in the Netherlands, while we were there, so she arranged for Michael, a local teacher who is deeply involved in BPM, to meet us. He was a fantastic host, giving us a tour of their part of Eleuthera, telling us about all the cool things BPM is doing, and showing us one of the most impressive trees we’ve ever seen! (And spiders – see pictures.)

After a night or two at Tarpum Bay, this chapter of our story came to a close as we headed for Governor’s Harbour to await the arrival of our next guests, Ingrid, Penelope, and Porter (Fran’s sister, niece, and nephew). I’ll write that Visit Report next! 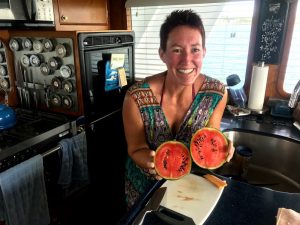 It was a wonderful two weeks, the first long stretch that we’d been able to do what we thought we’d be doing most of the time – leisurely cruising from island to island, exploring each one as much or little as we like, and then moving on. Don’t get me wrong – we love having guests, and getting to share some of our adventures with them – but “Fran and Brian” time is special, and this little adventure was definitely special.