Fran, May, and I made it back to Smartini, in the Key West Bight Marina, two days ago (Thursday, September 21), for our first look at her after Irma’s visit. Now that we’ve had a chance to look at the whole boat, the only things we found wrong that we didn’t already know about (from the pictures sent by a friend of a new acquaintance, shown in the previous Smartini vs. Irma update) were a broken radio antenna and a navigation light that came loose from its mount.

END_OF_DOCUMENT_TOKEN_TO_BE_REPLACED

(This should be almost the last update – the last one will come after we have a chance to get on Smartini ourselves, hopefully later this week.)

END_OF_DOCUMENT_TOKEN_TO_BE_REPLACED 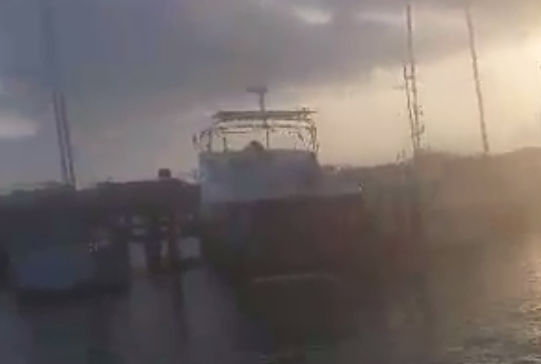 There’s a guy on a sailboat in the Key West Bight who’s been sharing pictures and video on his Facebook account: S/V Andromeda. (I can’t seem to share the video outside of Facebook, but I’ve shared it on my FB page, so if you have FB, just go to my page, and you can watch the video.) With about 25 seconds left in the video, he points to a boat and says “Guy over there lost his mast” – at that point, Smartini is just to the right of his hand. As you can see, it’s perfectly upright, and although his lens isn’t as clear as I’d like, there doesn’t appear to be a solar panel out of place, which we thought might be the case from the satellite image we saw yesterday. Fingers crossed. 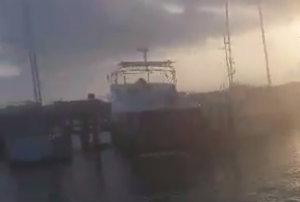 The Mayor of Key West released a statement within the last few hours saying it’s likely to be 7 – 10 days before people will be allowed to return to their homes, so unless we can find another way in, we’ve got some time to kill. We’re going to try to find some volunteering to do in the Northern and Middle Keys, as they open those areas up, so that we can be close, and to try to help out. Wish I had a chainsaw! 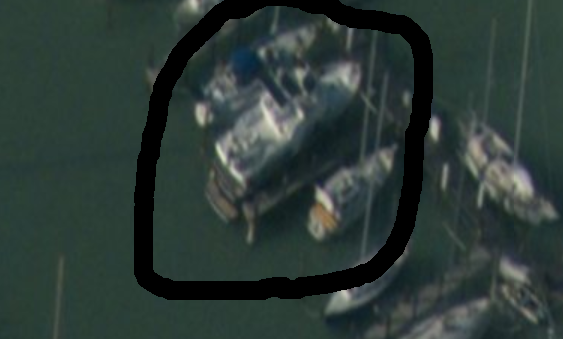 We just saw a satellite picture of Smartini, floating in her slip in Key West Bight Marina. Looks like one solar panel is very much out of place, but the dinghy is where it should be. That’s about all we can tell from the image, but at least we know she didn’t break loose, and that the docks stayed in place. 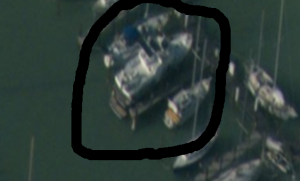 If you want to look at the imagery yourself, click here, then zoom in on Key West. On the north side of the west end of the island is the Key West Bight Marina, which is labeled in the image. Zoom in on the silver-roofed building in the middle of the marina, and Smartini is in the first row of boats to the east. She’s the one that’s even with the north end of the building.

We still need a first hand report from someone in Key West, so if anyone reading this knows anyone who’s still in Key West, and has any way to communicate with them, please send me an email at ba58smith@gmail.com with their contact info. 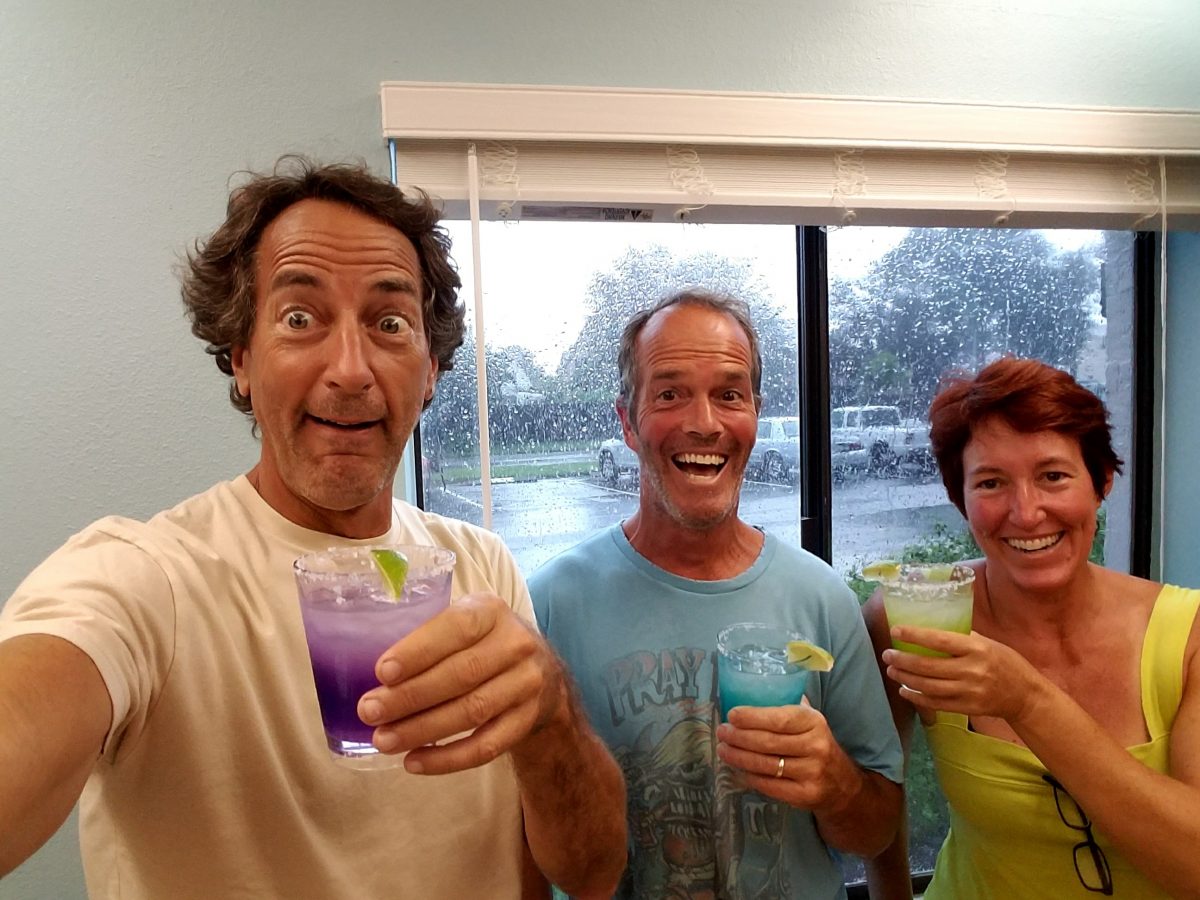 Smartini was left in Key West Bight Marina, secured as well as we could, and we drove north to Satellite Beach, our old stomping grounds. As you may have seen on the news, Key West got hit pretty hard, but our initial “insider” reports are that it wasn’t as bad – at least, not as much damage – as everyone was expecting. We’re still trying to get an update from someone who’s in Key West – someone who can actually go take some pictures of the boat. 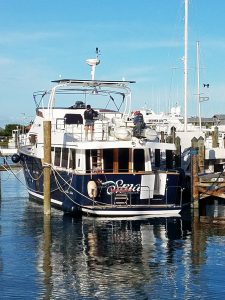 Steve Powers, whose family now owns Turtle E. Awesome (we were half owners with them originally), drove to Melbourne last Thursday, and all three of us (Fran, Steve, and me) spent all day Friday getting him into a better-protected slip, and all tied up. Initial word is the marina’s in great shape, so we have no reason to believe the Turtle isn’t, too. We’re heading that way in a few minutes to see for ourselves. 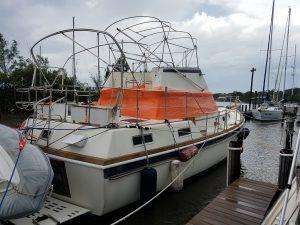 We’ve all spent the last several nights at dear friends’ places – first at Robin’s in Indian Harbour Beach, and the last couple nights in Melbourne, at the currently vacant condo of the father of our friend Q. Can’t thank you guys enough for letting us hang out here – it’s been great to have comfortable digs during this whole thing.

And in case you’re wondering – May seems to be fine.

More news later, when we have pictures of the Turtle and Smartini.

An intermezzo is, according to Webster’s, “a short part of a musical work that connects major sections of the work.” Key West has been an intermezzo of sorts in my life.

It marked the change from the first 22 years of my life (mostly living at home, no college degree, not married) to the next major section (married, college degree, real jobs, eventually kids), as Terri and I honeymooned there in 1981, just weeks after we graduated from Indiana University, and just before moving to South Bend, Indiana where I would start my first real job.

END_OF_DOCUMENT_TOKEN_TO_BE_REPLACED

A brief update on Fran, Brian, May, and Smartini, in light of the #$%&@ hurricane that’s heading our way.

Just to let everyone know, Smartini is in Key West, pretty much dead center of the predicted path for Hurricane Irma, 4 – 5 days from now. We’ve considered all of our options, and “running” doesn’t seem like a good one. Where would we run that wouldn’t have at least a decent chance of being the actual location of Irma’s landfall? The Florida Keys aren’t an ideal cruising ground for Smartini – with our 6′ draft (how deep under the water we are), there aren’t many places that we can get into. Marathon and Key West are about it, and although we could make it back to Marathon before the storm hits, then we’d be on a mooring ball, surrounded by an awful lot of boats that aren’t in such good shape, and whose owners are either completely absent, or at the very least not too concerned about their vessels. In other words, we’d be very likely to get slammed by one or more loose boats. Here in Key West, we’re in a nice marina, protected on three sides, with what seem to be solid pilings to tie up to.

It’s now Tuesday night. Tomorrow morning, we’ll finish the boat preparations (bringing everything inside that we can, and putting every line and every fender we own between the boat and the dock), and tomorrow evening, we’ll drive north to our old stomping grounds – Satellite Beach / Indian Harbour Beach / Melbourne. There, we’ll visit friends, get some wings at Long Doggers, drink lots of great beer at Intracoastal Brewing, and watch Irma from a safe distance. When it’s safe, and the Monroe County Sheriff’s Office says we can, we’ll drive back to Key West and hopefully find a fully intact Smartini, ready to continue the Big Adventure. And if not… well, that’s why we have insurance.