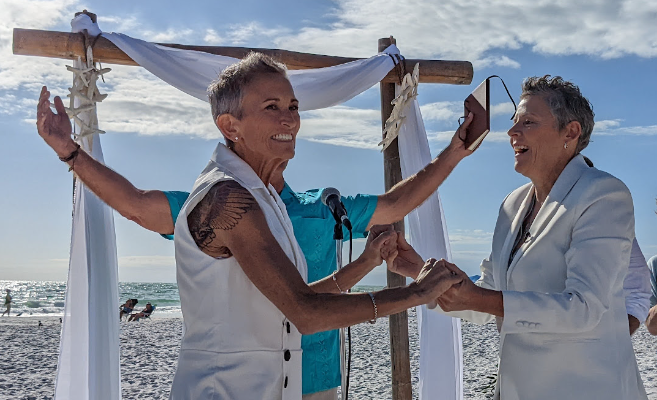 A dear friend of ours (and of many of you, too), Robin, passed away this morning after battling ovarian cancer for about 17 months. She was only 58, and prior to her diagnosis, she was the most physically active, health-conscious, fit human in my group of close friends.

She was also an absolutely wonderful, thoughtful, kind, generous, happy person, which makes it all the worse that she was taken from us. I suppose I’m fortunate in that she is only the third person who I have been very close to who has died way too young, but I don’t suppose you ever get used to it. So I’m sad and pissed off about her passing, and haven’t even begun to process the grief of it.

But I’m not going to write about that today. Instead, I’m going to tell you about the most incredible wedding I have ever attended, one that I doubt will ever be surpassed in my experience. It was Robin’s wedding, just over a month ago, when she married Cathy, the love of her life. They were engaged way back in July 2018, and set the wedding day for exactly five years after the day they first met (March 25, 2017). It seemed like a long way off, but I think they figured if they still wanted to get married after five whole years, they probably should.

When Robin was diagnosed in the fall of 2020, of course they knew she would beat it, so that still-far-off wedding date was OK. She underwent some brutal chemo, and for a while, it looked like she had beaten it. They even bought an RV and named it “Neddie”, for the medical term “No Evidence of Disease.” They spent a week in the Florida Keys in it, then they headed north, up the East Coast, to celebrate the victory.

But it was short-lived. The cancer came back, this time with a vengeance. More treatments were tried, but nothing was working. Still, the wedding date did not change! They just knew something was going to start working, and so many plans had already been made.

Well, of course they made it to the date, or I wouldn’t be writing this. Friends and family started arriving a few days before, and the party started. Robin was having on and off good times and not-so-good, but whenever she and Cathy looked at each other, the smiles were ear-to-ear. They knew they had made it, and their realization of that, at that time, was enough. Their love for each other filled every room they entered.

Fran and I sat across from them at the rehearsal lunch, and the way they looked at each other was the most pure expression of true unconditional love I have ever seen. And if there was a dark cloud hanging over the festivities, they weren’t even going to acknowledge it. Not that day, not the whole weekend.

On the day of the wedding, we didn’t see them until about an hour before the ceremony. Robin had not been having a good day up to that point, but she found the strength she needed, and when we saw her, it was the same as the two days before – miles of smiles between the two of them whenever they looked at each other. They were both gorgeous in their wedding finery, the weather was perfect, all of their most important people were there, and the ceremony went off without a hitch. When they were pronounced “Married!”, their smiles got even wider, as you can clearly see in the picture. They had done it – made it to this day, despite all odds – and dammit, they were going to enjoy it!

The reception was more of the same – endless smiles, frequent squeezes of each others hands, and except for the fact that Robin had to sit out several of the dances, almost no indication that this wedding was any different than any other.

But it was different. Weddings are usually just a really fun day and legal necessity before two people move on with their new lives together. No one expects that “til death do us part” is going to come any time soon. So of course they hold hands and kiss a lot, and smile at each other, but it doesn’t have the significance, the gravity of this one. It was really something special – as I said, I think it was the best wedding EVER!

And it’s how I will try to remember Robin: the way she was for those three days – strong, happy, and loved by Cathy like all of us hope to be loved, at least once in our lives.

And I will try to let their behavior and attitudes, during the entire time of Robin’s battle, reinforce the lesson my brother taught me at the end of his life – that this is no dress rehearsal. We get only one shot at life, so it’s absolutely crucial to find the things that make you happy, and do them as much as you can. Robin and Cathy found each other, and vowed to be together “til death do us part” long before their wedding. And I will try to (as Robin and Cathy liked to say to each other) “drink the good stuff first.” They did, and I’m so happy that I got to be there to see it.

4 thoughts on “The Best Wedding EVER”