I’ve had a home in the Midwest all my life – until yesterday. 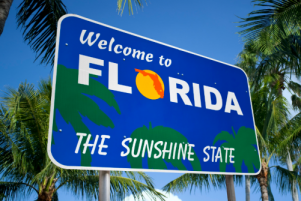 (I wrote this post on September 3, but the blog wasn’t up until very recently. Since we just left the Midwest again – this time, after our Thanksgiving visit – I thought it was a good time to finally post this. BS)

Yesterday, I left the Midwest. I’ve done that hundreds of times before, but the next time I go back, it will be as a visitor, not a resident, and it seems unlikely that I’ll ever call it home again. For my entire life, I’ve had somewhere to live in the Midwest.

First it was Ohio (born in Findlay, lived in Arlington for a year or two, then Bowling Green for about five). Indiana was next (Indianapolis from age seven until seventeen), then a short stint in Illinois (Mt. Carmel, until high school graduation). Back to Indiana (Bloomington for four years at Indiana University, then a year in South Bend to start my first adult job, then finally, back to Indianapolis). I bought a house in Florida more than twelve years ago, and have been a legal Floridian ever since, but even then, I kept the house in Indianapolis, so I could be there with Maddie and Bennett every other week. So for every single day of my life, until the closing on the Indy house three days ago, I’ve had a place to call “home” somewhere in the Midwest. Now I don’t.

It seems like I should have more emotion about it, but the truth is – at least for now, the only negative feelings I’m experiencing are for the people I won’t get to see very often – Maddie and Bennett most of all, the Stanhouse family, Susan and Rami of course, and our long-time beer drinking, boat talking buddy Steve. More on this later. Aside from that, I’m ready to be an ex-pat of the Midwest.

I left the Midwest in my rear view mirror for two main reasons. First of all, I hate being cold. Secondly, I REALLY hate being cold. This is the truth: as beautiful as a Midwest autumn is, I’ve not really enjoyed one for well over twenty years, because I knew that autumn would be followed immediately by winter, and I would freeze my tookus off all winter. I’ve said at least a hundred times that my feet get cold in October and don’t thaw out until April – and it’s not much of an exaggeration. I hate being cold so much that I’m not just leaving the Midwest to get away from it – Fran and I are leaving Florida to get away from it! Yep – even the Florida Keys gets colder in the winter than I want to be. That’s the reason we’ve sold both of our dirt homes and moved onto Smartini, and are making preparations to head to the Caribbean for a while – so we can hopefully find somewhere down there that we’ll want to live, where it literally never gets cold. But that’s pretty much all I’m going to be writing about from now on, so let me get back to today’s topic: leaving the Midwest.

I used to say, when asked where I lived, “I live in Indianapolis… but if I die there, I’m going to be really pissed.” And I meant it. Buying the house in Florida in 2004 changed that, because I finally knew I wouldn’t spend the rest of my life in Indy. Then I started telling people who I met in Florida “I’m from Indianapolis – it’s a great place to be from.” And I meant that, too. Lemme ‘splain: I’m glad I grew up in the Midwest, among Midwesterners, learning great Midwest core values like working hard, helping your neighbor, and never, ever, under any circumstance, letting a visitor to your home leave hungry. But it’s also a place where, if you’re not careful, you can learn intolerance and bigotry, because in so many Midwest communities, those are pervasive. I know those aren’t unique to the Midwest, but it seems like they’re more prevalent there than a lot of other places I’ve visited. Maybe it seems that way because of the type of people who keep getting elected there. Or maybe it’s real, because of the people who keep getting elected there. OK, no politics. Attitudes aside, Indianapolis is a great place to be from because of its almost total lack of “fun geography.” No mountains, no ocean. No rivers of any consequence. (Sorry, White – neither your East nor West Forks offer much in the way of excitement.) Just a lot of mostly flat farmland with some trees here and there. Damn you, glaciers! (I know – other parts of the Midwest are more hilly, and some have big lakes, and I’m sure there are fun rivers here and there – but not in Indianapolis, and that was my part of the Midwest.)

I think I’m missing some gene that most people have – the gene that puts family before all else. The survival of the human race is probably dependent on most people having that gene, but somewhere along the path to me being formed, I didn’t get it. I apologize to Maddie and Bennett, and to my mom and sister; I know that bugging out to warmer climes isn’t going to win me Dad/Son/Brother of the Year with any of them. I will miss them, for sure. Fran and I will come back to visit several times a year (avoiding the coldest months, of course). I will even feel guilty sometimes about not being there. But not enough to get me to stay.

I have good friends in Indiana. No, make that great friends. But I also have great friends in Florida, and Colorado, and Texas, and Ohio and North Carolina. I can’t be around all of them all the time, no matter where I live. Hell, I’m not around most of them very often at all, now that I think about it. So leaving the Midwest won’t change that in a significant way. Great Friends of Mine: you know where to find me, and I expect you to do so.

Yesterday, I left the Midwest.

9 thoughts on “Yesterday, I Left the Midwest”