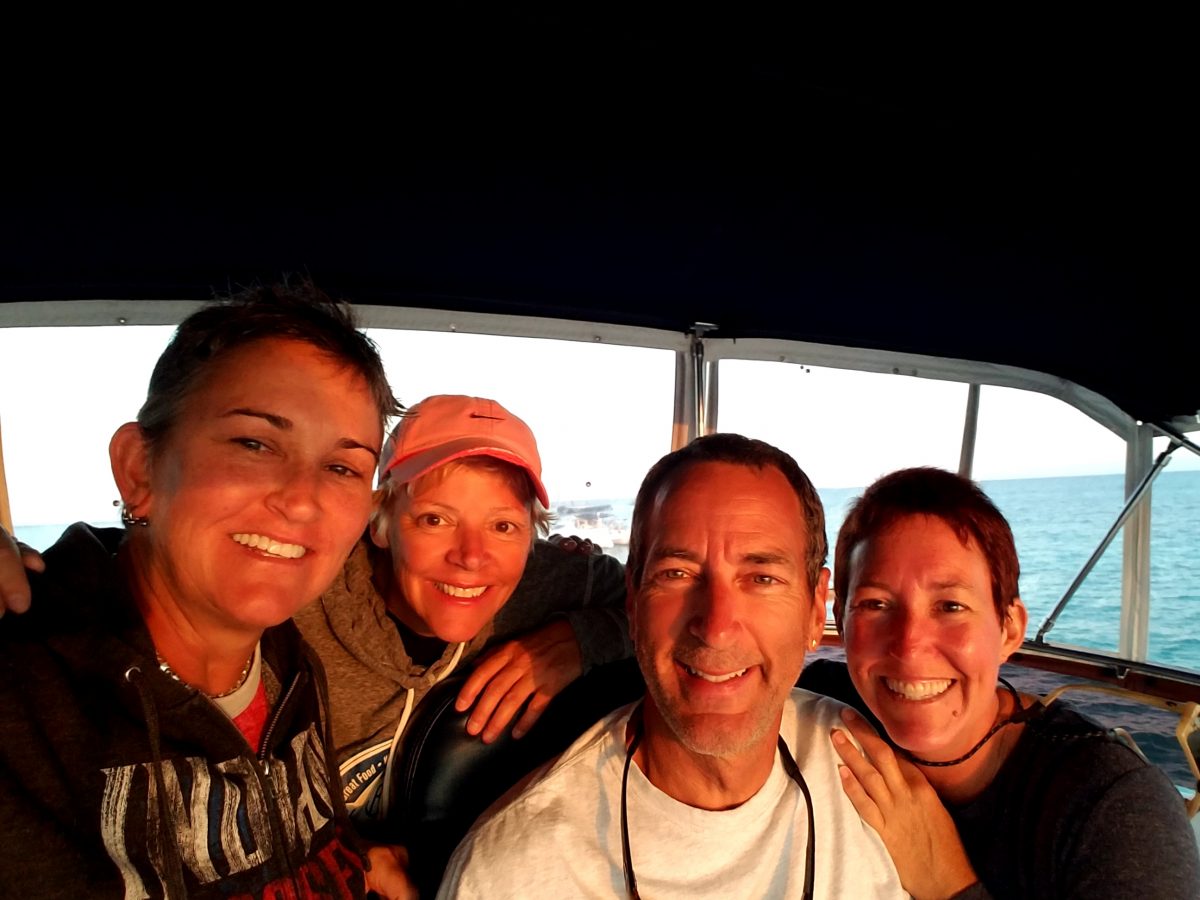 Fran and I have known Robin since 2009 or 2010. Like most of our Florida friends, we met her through Crossfit. She’s been a dear friend almost since the beginning. She’s been to Indianapolis for Winterfest, so she’s met a bunch of our Indy friends, too. She met Cathy a year ago (they celebrated that anniversary while onboard, in fact), and Fran and I have been able to spend some time with Cathy during that time, so we figured she would probably make a good guest.

They arrived early on Friday the 23rd for a four night stay. We spent the first night in Nassau Harbour Club (our new marina-of-choice in Nassau), because Robin needed to get to a local Crossfit gym to complete the last of the five Open workouts, which had been announced just the night before. (Thrusters! Robin’s favorite!) We found Happy Hour Crossfit (is that a great name, or what?) and its most gracious owner, Mario Jordan, less than a mile from the marina. He met us there 30 minutes before his first afternoon class, so he could devote his total attention to judging Robin. What a great guy, and a great gym! Not huge, but bigger than I expected, and well equipped. (The gym, not Mario. Well, Mario, too, I guess!) A perfect place for Robin to complete her last Open workout, as it was less than a three minute walk to the Green Parrot Bar, where we had some appropriate post-workout beverages (Tito’s Recovery Drink for Robin), and some quite tasty dinner.

The next morning (after much sleeping in by the guests), we headed out to Rose Island, where we had spent a couple nights with Bennett, to spend the next two days and nights. There’s really nothing to do there other than relax and snorkel, so that’s what we did. Cathy had never snorkeled before and was a bit anxious about it, but within five minutes of getting in the water, she was as comfortable as she could be. We were on a shallow, healthy reef, so there was plenty to see, and after another five minutes, she was hooked! We stayed in the water until all four of us were starting to shiver, and when we got out, she couldn’t stop talking about how cool it was. Yep – hooked for sure!

Over the next 48 hours we were in a rythm: sleep late, leisurely breakfast with Bloody Marys, snorkel until we got cold, cocktails, lobster for dinner, more cocktails, and sleep. Wash, rinse, repeat. We snorkeled on the north and south sides of Rose Island, and both were equally nice. It’s surprising how healthy the reefs are in this area, since they’re visited by literally hundreds of tourists from Nassau every day. Fran and I were able to demonstrate some of our hunting skills, getting a lobster or two on each dive, and I shot a snapper with my new Hawaiian sling (I need a LOT of practice!) Robin and Cathy think Fran is some kind of lobster ninja, after watching her sprint to the bottom and skewer a big bug that I had chased out of its hole. Ask one of them to tell you the story – it gets better every time!

Our last snorkel before heading back into the marina yesterday afternoon was one for the books. Fran, Robin, and Cathy practically ran into a loggerhead turtle who couldn’t have cared less about them being there, and saw two other smaller turtles. I surprised Robin and Cathy with a nurse shark that I poked out from under a ledge. Fran found some giant sea hares, and we learned that they squirt purple ink if they feel threatened (i.e., if you poke them with a spear tip). The women found a total of five lobsters (I have apparently lost my ability to find them, as I saw only the ones they found), but we caught only two – another nice spiny, and yet another big slipper. One was too small, and we simply couldn’t get the other two. There was a big Atlantic stingray. And of course, countless little tropicals that cover the spectrum of colors, shapes, and sizes.

One afternoon, we had cocktail hour with our new Canadian friends on Dances with Dolphins, Janice and Wes, along with Wes’s sister Karen and her girlfriend Karen. We spent a good bit of time each day on the flybridge, enjoying the nearly perfect weather, and being entertained by Cathy’s non-stop exclamations of how beautiful the water was, or how delicious the lobster was, or how fantastically she slept every night, or how much she LOVED snorkeling. (Robin, you were a wonderful guest, too, but I keep mentioning Cathy because she never stopped acting like a kid on Christmas morning!)

Our last evening, back in the marina, we took a cab across the bridge to Paradise Island and Atlantis, just to see it. If you like Las Vegas and Disney, you’d probably like Atlantis – it feels like a marriage of those two. Pirate Republic Brewing (the only craft brewery in the Bahamas) has a tasting room there, and we enjoyed their IPA and stout. (Nothing to write home about, but for beer lovers like Fran and me, it was heads and shoulders above all other Bahamian beer.) We really enjoyed the huge aquarium in Atlantis – the manta rays, spotted eagle rays, Atlantic stingrays, and literally thousands of fish, were quite impressive, and the tank itself is ginourmous. But Fran noted that anyone coming to the Bahamas and experiencing only Atlantis is, sadly, totally missing what the Bahamas are really like.

Traveler’s Tip: In Nassau, if you take a cab, be prepared to feel like you’re getting screwed almost every time. Some of them have meters, but we never saw one turned on. One driver said they use them for the locals, but they have “fixed prices” for tourists. Translation: they make up the price every time you get in the cab, probably based on everything they can ascertain about you during the ride. When Bennett arrived, we took a cab to the airport to get him, and then brought him back to the marina in the same cab. The fare was NINETY DOLLARS!!!! (It was maybe 20 minutes each way.) The last evening Bennett was here, we took a cab back from a restaurant one night. (We walked there, but didn’t walk home because the street was very busy, with no sidewalk and no lighting, and after dinner it was very dark out.) The fare was TWELVE DOLLARS for THREE MINUTES! Just last night, we paid $20 for the maybe six minute ride to Atlantis, but when we came home – a shorter trip, because it had all the one way streets in the right direction – it was $23. The driver took a full ten seconds to come up with that amount when I asked her what it was going to be, and then defended it like a mother defends her offspring when I told her we paid only $20 to get there. If there’s a way to make it seem like less of a rip-off, I haven’t figured it out yet.

At 7:00 this morning, they hopped into a cab for the airport. We crammed a lot of fun into four days and nights with Robin and Cathy, and they’re already scheming to get back onboard. They’re certainly welcome any time!