Our six month stay in Fort Pierce is over. A lot of unexpected things happened while we were there! 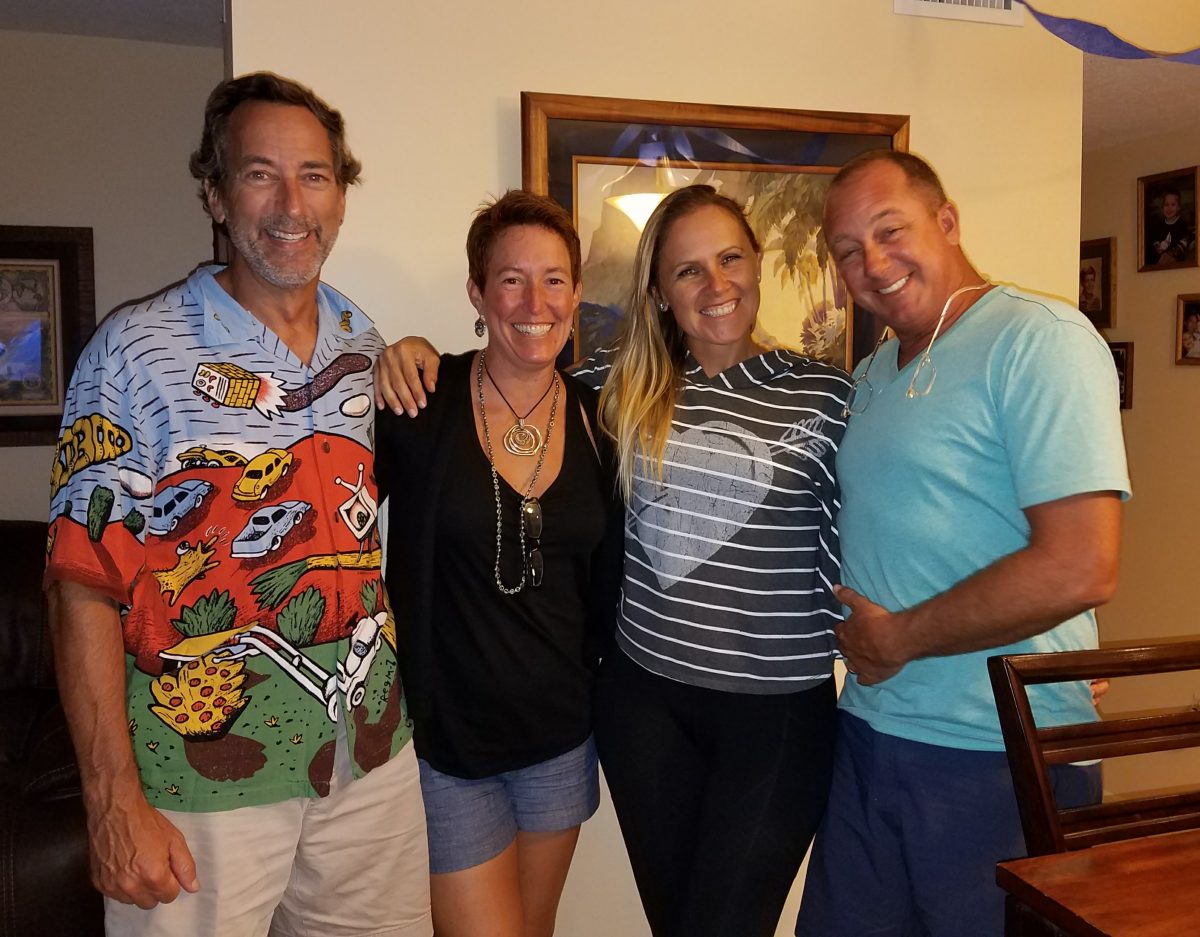 A week ago, Fran, May, and I steered Smartini out the Fort Pierce Inlet, turned south, and if things go according to plans (which they almost never do!), we won’t see Fort Pierce from the deck of Smartini ever again. Not that we didn’t like Fort Pierce – we actually liked it quite a lot. We just hope to spend the rest of our time on Smartini farther south. 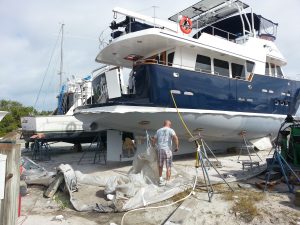 A lot of unexpected things happened while we were in Fort Pierce, starting with the main reason we were there in the first place – the need to completely re-do the “down to bare metal” paint job on the bottom of Smartini. As I’m sure I’ve written before, we had a total bottom job done right after we took possession of the boat in January 2016. With routine cleanings, and a new coat of anti-fouling paint every year or so, it should have lasted 8 – 10 years. Instead, it didn’t last 8 months. In short, it was done badly, and by the time we hauled the boat out of the water for another reason in mid-December 2016, there were already good sized patches of bare metal showing, and hundreds (thousands?) of little water-filled paint bubbles all over the bottom. Unexpected Thing #1 – we’d have to haul out again and completely re-do the bottom job – and this time, we’d do it ourselves, to make sure it was done right.

We had been in Fort Pierce less than a month when Unexpected Thing #2 happened – the passing of our daughter, Maddie. I can’t write about that yet, other than what I already wrote, but needless to say, our whole world changed that day. Among those changes were our plans to head for the Bahamas ASAP (we’d be holding off on that indefinitely), and our motivation to throw ourselves into Smartini projects with much enthusiasm – we had none.

Once we realized we’d be in Fort Pierce for much longer than expected, we started exploring the town (translation: looking for places to eat and drink). Unexpected Thing #3 was that we really liked it! Here’s this town, only an hour’s drive from Satellite Beach (where we lived for the past 12 years), that we knew nothing about. Its little downtown area is home to a great brewery (Sailfish Brewing), a nice “tiki pub” at the marina (Cobb’s Landing), a tiki bar (also in the marina – The Original Tiki Bar), a tasty, funky little taco dive (called, conveniently – The Taco Dive), and at least 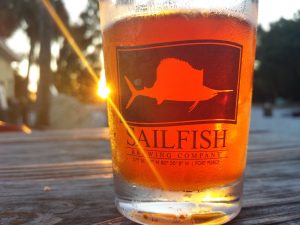 four other restaurants at which we had good sushi or breakfast. Leave downtown, and drive just a mile or so to the hard-to-find but do-not-be-missed restaurant called 12 A Buoy (home of the best fried oysters I’ve ever had, and the best appetizer menu I’ve ever seen), Lenzi’s Diner (crunchy fish for breakfast? yep!), or Captain’s Galley (excellent straight-up American breakfast). Drive across the South Bridge to beachside for cheap beer, decent food, live music and a funky beachside vibe at Archie’s Seaside. Or breakfast at Dave’s Diner (open 24 / 7!). Or a great brunch buffet at Manatee Island (at least, it was there on Mother’s Day – as good as it was, I hope they do it every weekend.) Suffice it to say, we did not go hungry or thirsty in Fort Pierce.

Unexpected Thing #4 was the friends we made. Keep in mind, we expected to be there two weeks, so we weren’t looking to make any real friends. As with all boating activities, you can’t help but meet people you like to spend time with, but usually it’s like two ships passing in the night – brief encounters, probably never to be repeated. But we were there 6 months, and we made some real friends. Chris and Christina Bryan started out as the people who would guide us through the new bottom paint job (them advising , Fran and me painting – and painting – and painting). By the time we left, we had been to their house for dinner three times (once to celebrate Christina’s brand new US Citizenship!), had met their two great kids (Elizabeth and Mathias), had them onboard Smartini for fish tacos, been out to dinner with them twice – and they now have an open invitation to come spend time with us on Smartini, wherever we may be! I’m sure we haven’t laughed harder in the last six months than listening to Chris and Christina tell almost any funny story from their past – especially if it involved Christina’s sister, Valentina.

And then there’s Ben Baker. A quiet, unassuming man (so quiet and unassuming, I never got a picture of him) who knows more about boats than anyone I’ve ever met, and who freely shares that knowledge. Yes, his business is fixing boats (or as he prefers to describe it, making people fall in love with their boat again), but he gives away more expertise than he charges for, and as we found when he was helping troubleshoot a problem with our generator, he’s thinking about your problem instead of sleeping sometimes! In the 6 months we were in Fort Pierce, I honestly don’t recall asking Ben a single question about an issue with Smartini that he didn’t either know exactly how to address, or he knew who we needed to talk to who did. His shop is a wonderland of tools, parts, and supplies that is also his happy place. And after hours, when he finally relaxes enough to enjoy a Scotch and water with you, he’s got an endless supply of boat stories, starting with the story of how we was born in a rowboat, right up to the boat that limped into the marina that morning. He, too, has an open invitation to visit us on Smartini anywhere, any time, but I doubt he’ll take us up on it – I think he’d be afraid of leaving someone stranded in Fort Pierce if he weren’t there to help them out.

We met Leanne Grant through Ben. Leanne came from Australia to Connecticut to buy her dreamboat – a big, beautiful sailboat named Caprice. On her way back to Australia with it, she ended up in Fort Pierce for some repairs, and like us, she ended up staying a lot longer than expected. Also like us, she met Ben Baker, who has helped get Caprice ready to resume the long journey Down Under – and the two of them have been enjoying each others company. Leanne’s wonderful – but her trip must continue – she’s in a 6-week countdown to launching from Fort Pierce, through the Panama Canal, and home to Australia. Leanne, we hope to join you somewhere on your journey! (We’ll be flying, though.)

Unexpected Things #5 through ??? include all the things we learned about Smartini during our time in Fort Pierce, many of which, unfortunately, were issues that needed to be addressed, and which added to our extended stay. I’ll list the big ones: significant rust around one of the portholes in the Master Stateroom and less significant rust around several others; significant rust around the anchor windlass; a pinhole leak in the main engine exhaust elbow (requiring removal and repair); rust around 4 of the 8 hawse holes (through which dock lines pass); a completely clogged heat exchanger on the generator that (through a series of events I won’t bother to explain) lead to me letting 8 gallons of hydraulic fluid leak into the bilge (hey, it was past time to replace that fluid anyway!); a “galvanic survey” of the boat, indicating that somewhere onboard, a major appliance may be wired improperly. (I know, I know… you’re thinking we bought a real piece of crap boat, what with all the work we’ve had to do on it, right? But we actually bought an awesome boat, which had been allowed to sit unused for almost two years – and ask any boat owner – boats need a lot of attention, and if they sit for long periods without being used, they need a lot more. We’re about to the end of all those things – we hope!)

No story about our time in Fort Pierce would be complete without mentioning the amazing crew at Cracker Boy Boat Works, the Do It Yourself yard where Smartini was hauled out for 5 months. Cindy, Woody, Rick, Fred, Teak (or “Ted”, as I called him for months), Tip Tip, and Sean. The amazing ship’s carpenter shop (The Ship Shop) of Philip and Dave, who repaired the cherrywood panels in our master stateroom with hand-made replacement tongue and groove that you can NOT tell from the original. The ever-present Hazel Lopez, who’s smiling face and “Alright, alright!” were there to brighten your day, almost EVERY day, as he made tired old boats all shiny and new again.

Unexpected Fort Pierce – maybe it should be their tourism promotion slogan. Certainly, if you ever find yourself in the area around lunch time, or if you just want to go try someplace different for a Saturday or a whole weekend, head for the Fort Pierce City Marina, park the car nearby, and prepare to be surprised. We certainly were!